Blustery conditions and dark skies marked the third day of the Super Retriever Series Crown Championship as an impending storm loomed in the forecast throughout the day. Despite the weather, the first dog/handler team walked to the line at 10:30 am CST just southeast of Shreveport, Louisiana on a beautiful piece of Caspiana Land property. Series three would see the top 18 amateur and top 18 open division teams battling it out, trying to make it in the top 12 to advance to series four. Series three saw dog/handler teams facing a hunt savvy scenario, the most realistic hunting setup the teams have faced thus far.

The series three scenario simulated an incoming group of ducks to the far right of the course with the handler blowing a duck call to signal the first mark and then firing a blank shotgun twice. As the first 105-yard mark hit the water, a second shot was fired, followed by a 150-yard mark left of the first bird. Handlers then had their dog sit while they moved to a separate station to the left. Once in place, a second group of ducks was simulated with two shots coming from an adjacent blind situated across a narrow strip of water. With each shot, a 50-yard mark was thrown. The second of this pair was then picked up by a gunner in the adjacent blind with the other gunner yelling for the dog to pick up a long cripple replicated by a lengthy 215-yard blind. Further complicating the blind retrieve, the dog’s line took them past the remaining second mark, a temporary poison bird until the blind was retrieved. After the blind, handlers had their choice of order on the remaining three marks. Dogs crossed water and marsh grass on every retrieve.

“The major challenge for most of the dogs is going to be the blind retrieve,” said J. Paul Jackson, SRS Crown Series commentator. “It is a remote send and there are plenty of opportunities for confusion, especially the poison bird. This course lends itself to methodical dogs that can work it out and put the pieces together.”

Another opportunity for confusion, albeit unintended, was a crop duster working the adjacent field that periodically buzzed teams during their time at the line. Just like a real hunt, you never know what is going to happen out there.

“This is just like where we duck hunt,” said amateur competitor Justin Hightower. “You couldn’t ask for more beautiful grounds.”

“A course like this is why we come,” added open division handler Lee Howard. “This is SRS at its finest.”

One amateur team with an impressive performance was Steven Guzman/Dre who came out of the gate swinging with a quick retrieve on the opening blind that when combined with their marked retrieves, earned them a 106 which put the team in second position going into series 4. When asked his thoughts about the success of amateur teams this year Guzman credited an abundance of one-on-one training time.

“When you only have one or two dogs you are competing with you can spend a lot of time with a dog and really develop a bond,” he said after his run with Dre towards the end of the day.

Series three concluded in the nick of time as the storm that was promised all day finally appeared. After day three, competition is high moving into series four with very close scores in both the amateur and open divisions.

In the open division, first, second, and third are within a 19-point spread, and things are even tighter in the amateur division with the top three scores at 190, 194, and 199. One standing that did not change is Stephen Durrence’s prominent position going into series 4. While Durrence represented a third of the field in series three, he now makes up half of the 12 teams going into series 4.

“Over the course of these series the judges are going to test the teams on every aspect,” said SRS organizer Shannon Nardi. “If there are any holes, they are going to find them.”

Action kicks off tomorrow at 8 am CST, with the top 12 amateur and top 12 open division teams squaring off. You can watch the event live at superretreiverseries.com or livestream.com/srs 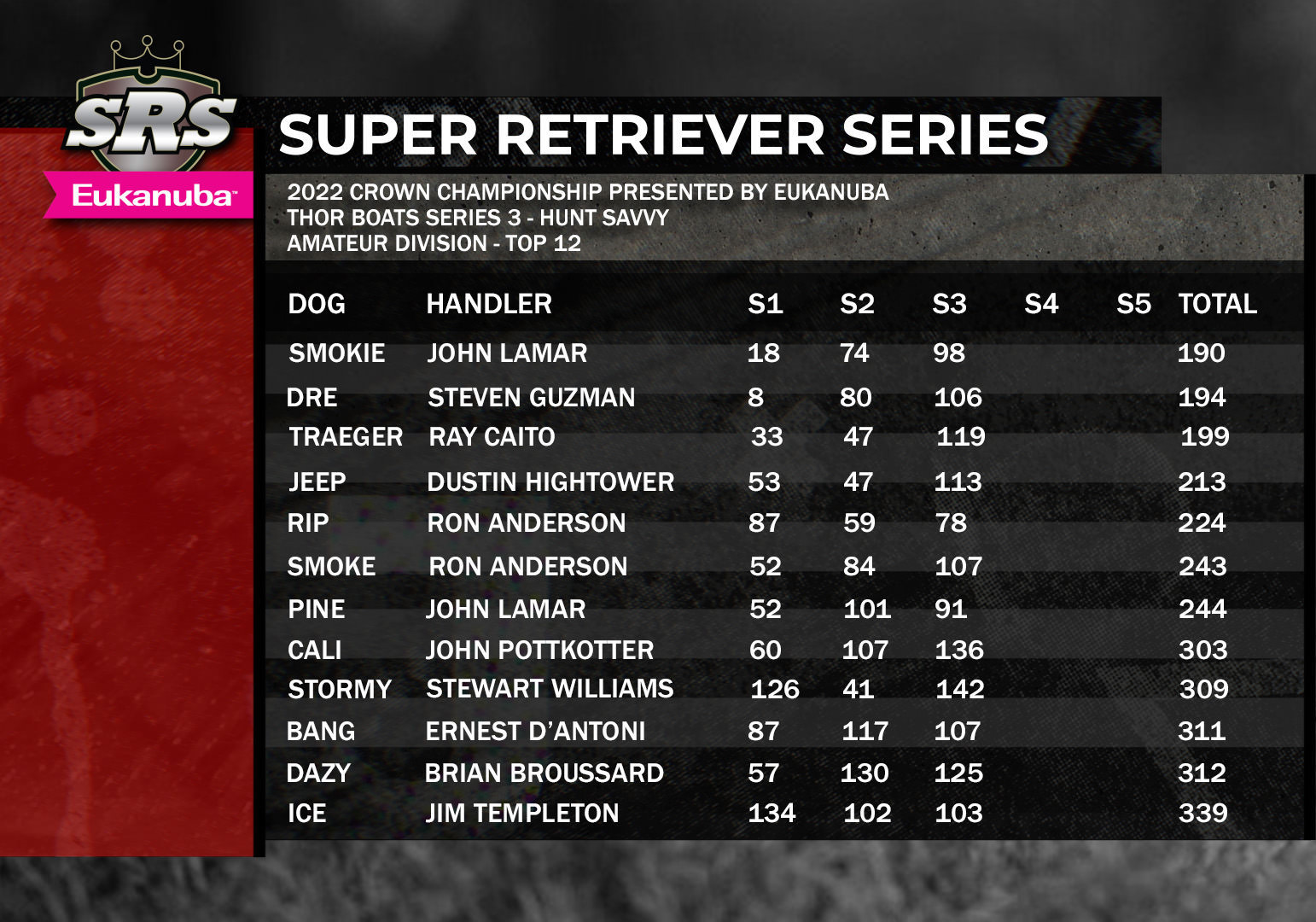