The grounds at the Super Retriever Series Crown Championship were wet and muddy after a strong overnight storm, but that didn’t slow down the remaining top 12 amateur and open division teams competing to advance to championship Sunday. After series four, the field was cut in half, with only the top six teams from each division moving on to the final series.

The top six amateur teams going into series four were John Lamar/Smokie (190), Steven Guzman/Dre (194), Ray Caito/Traeger (199), Dustin Hightower/Jeep (213), Ron Anderson/Rip (224), and Ron Anderson/Smoke (243), but with scores neck and neck within the entire field, no one was guaranteed a spot in the super six.

“With just a couple dozen teams left, everyone here is a contender,” said amateur handler Ernest D’Antoni. “Everybody here is really good.”

The series four course was a field trial/hunt test hybrid that had teams covering over 650 yards to retrieve three marks and one blind. The first mark was a 280-yard middle bird across a stand of water that challenged teams throughout the day. The second mark was a right to left bird that fell among a stand of marsh grass in a long slough around 140 yards down the middle of the course. It was another retrieve that many teams struggled with. The third mark arched across water 100 yards to the far right of the course. Just beyond the third mark, a blind was positioned just over 150 yards away at the base of a tree. For the blind retrieve, handlers had to control their dogs through a 10-yard wide “keyhole” between a gunner and a stack of bird crates. Failing to do so represented a 50-point penalty as did failing to take the water when retrieving the second and third marks.

The majority of amateur teams ran in the morning, with Ron Anderson/Rip making quick work of the course, including an excellent retrieve of the lengthy first mark that earned them a series four score of 40, the best amateur score of the day. Anderson, a handler with plenty of SRS experience also advanced to the super six with his dog, Smoke, who posted a well-earned score of 72.

Impressive performances in the open division included Leo Joseph/Gus who launched themselves from twelfth to second with a score of 14, securing their place in tomorrow’s open division super six.

“I really like that twelve spot,” said Joseph laughing, who has made similar jumps from behind in the past.

Luke Cour/Indy had a similarly impressive performance scoring a 63 and vaulting them from eleventh to fourth place, locking down their position in series five.

Stephen Durrence/Mason had the gallery cheering after finishing their run with a methodical retrieve of the final distant mark earning them a 40 for series four and placing them at the top of the leaderboard. This is Mason’s seventh crown championship and his experience shined through on the last retrieve of the day. Durrence and the dogs of Taylor Farm Kennels will represent three of the six dogs in the open division going into championship Sunday.

Tomorrow the eyes of the sporting dog world will be looking towards Shreveport, Louisiana as championship Sunday gets underway at the WK Palmetto Event Center where the six remaining handler/dog teams in the amateur and open divisions will square off to determine who is top dog. Series five will begin around 8 am CST streaming live at superretrieverseries.com and livestream.com/srs 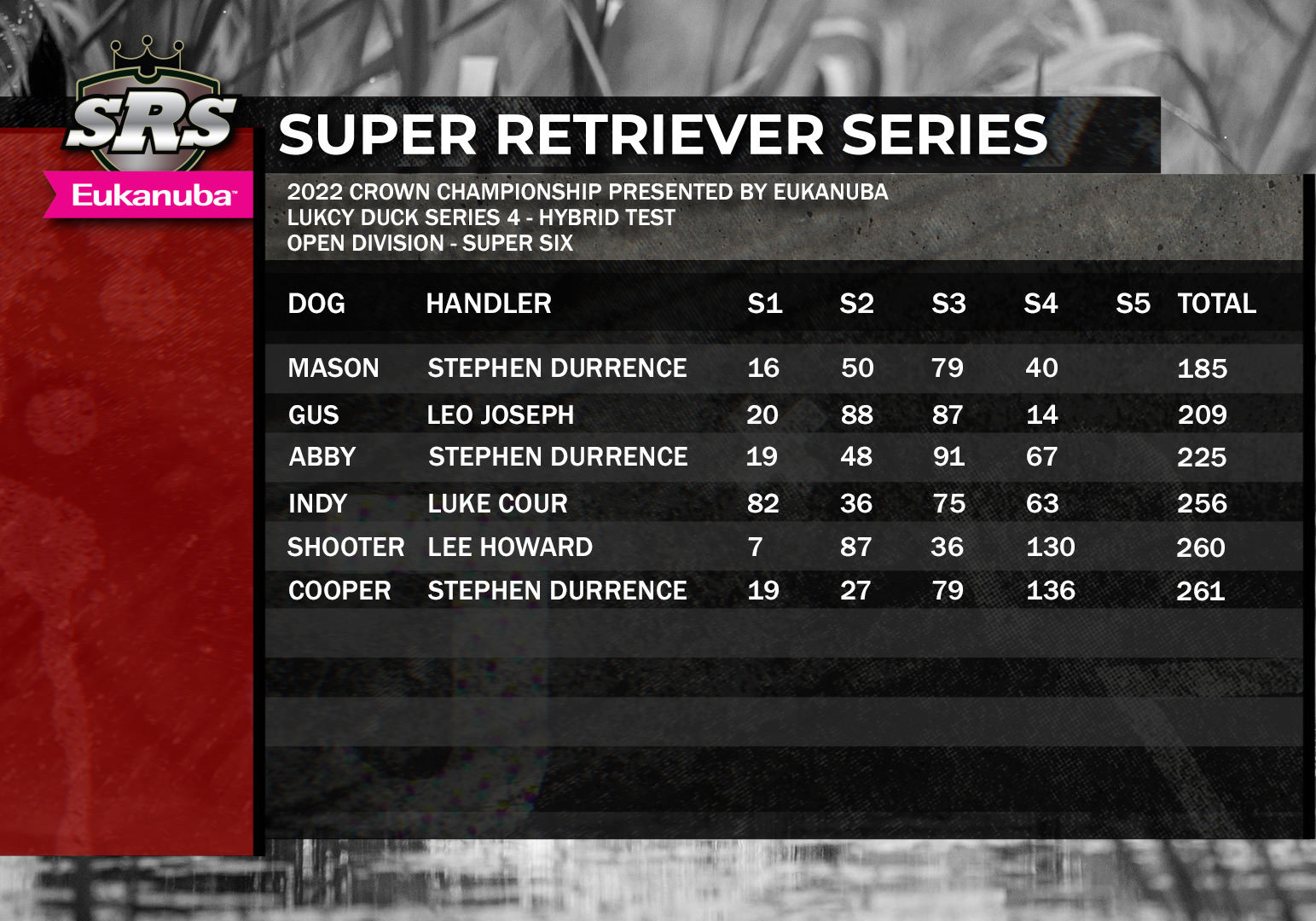 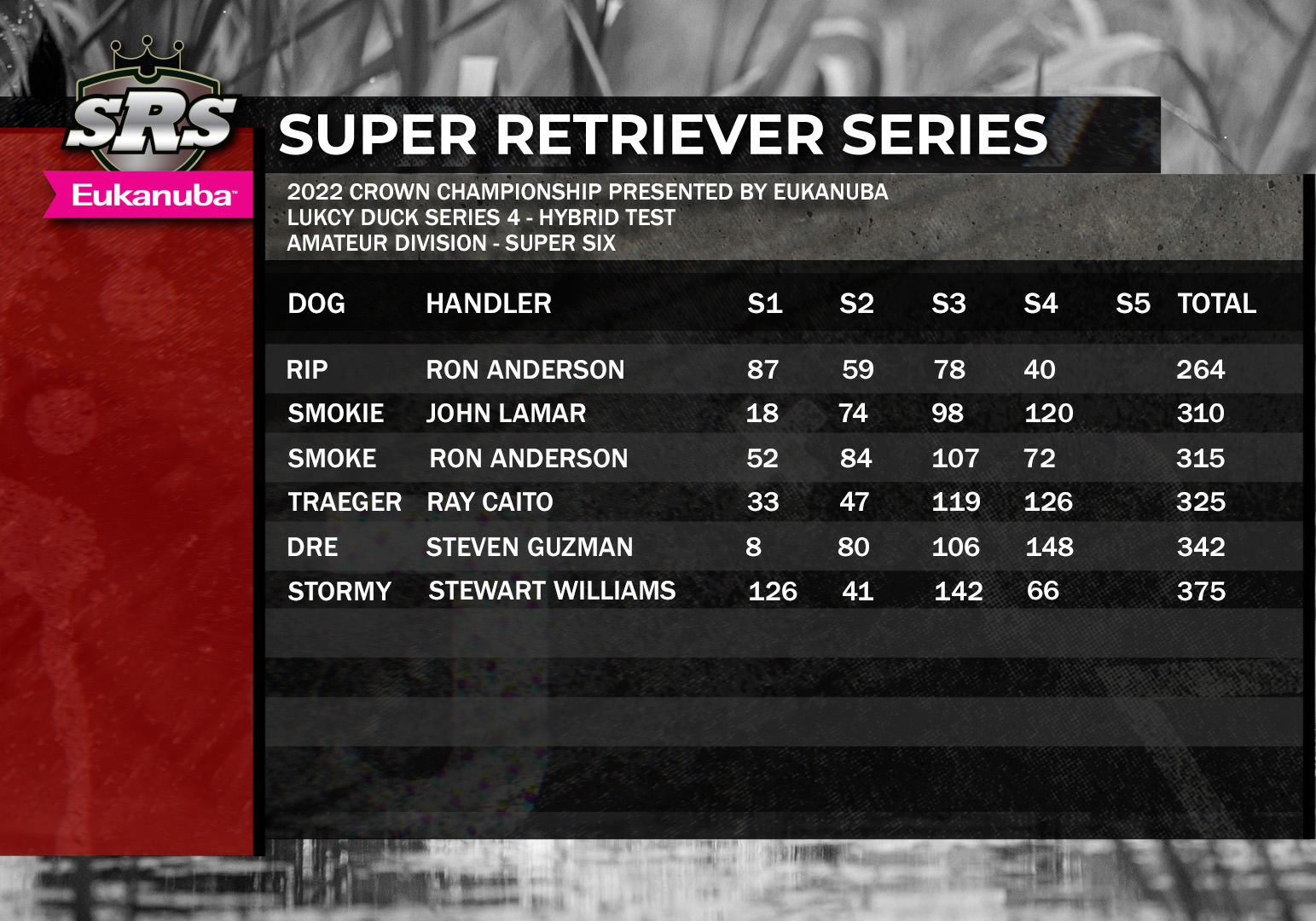