The day began with amateurs running the field trial/hunt test scenario, a course fitting of championship Sunday. The final series course was the longest of any seen so far, with five marks and a blind retrieve taking dogs over 850 yards by the time they were finished. The lengthy course tested each dog’s endurance and stamina throughout the day.

Bird one was a 247-yard field trial bird with many aspects of the course pushing dogs to the right and causing problems for many dogs throughout the day. Bird two was another field trial style bird going left-to-right and landing 157 yards down the middle of the course. After the first two birds, the course transitioned to a hunt test scenario, with handlers firing poppers for all three marks. Mark one came on the far right of the course, landing just over 100 yards away. Mark two was a short bird, which fell among snow goose decoys around 40 yards to the left. Mark three was a 125 yard right-to-left “go bird” with decoys strategically placed to push dogs off course. Lastly, the 250-yard blind was placed in a stand of pines that had many dogs pinballing from tree-to-tree while hunting for it. Handlers also had to control their dogs over a narrow obstacle of pine straw on their line to the blind. Failing to navigate the obstacle represented a major penalty of 50 points. Overall, the course was a testament to a handler’s ability and their retriever’s talent.

At approximately 10:30 am CST, crown championship marshal Matt Emerson called the first amateur team to the line. Series five amateur performances ranged in score by 147 points with all amateurs handling on at least one mark. Eukanuba Amateur Team of the Year, John Lamar/Smokie scored a 108 on series five, bringing their overall score to 423 and earning them third place. Ray Anderson/Smoke, no strangers to the crown championship, navigated the course well, scoring a 108 and simultaneously using the opportunity to gather information for Anderson’s later run with Rip. Rip, a young dog with enormous maturity, handled the first mark better than any other amateur team of the morning and had the crowd cheering from the stands as they finished the course with a score of 118 bringing their five series score to 382. Anderson’s handling of Smoke and Rip earned him second and first place respectively as well as a lifetime invitation to the SRS crown championship for Rip and a return trip to the crown series for Smoke in 2023.

“It’s been a fun week and Rip did really well,” said Anderson after the event. “He’s a three-year-old so everything is a first time for him, but he handled it well and performed very maturely for his age. Since he was a seven-week-old puppy I’ve groomed him for this moment. It’s very fulfilling and shocking that we are so ahead of schedule.”

Luke Cour/Indy came out swinging, taking a laser line to the blind, undoubtedly the best blind retrieve of the day that scored them an 87 with an overall event score of 343.

Leo Joseph/Gus, who made an incredible comeback in series four, also had a good showing with minimal handling on the marks scoring a series five 70, the lowest score of the day. While Joseph/Gus made up more ground on day five, they were just short of catching Stephen Durrence/Mason.

Stephen Durrence/Mason were the last to take the line, and ran the blind retrieve second only to Cour/Indy. Mason showed his experience in his white muzzle, focus, and veteran performance. In the end, Durrence/Mason edged out Joseph/Gus by seven points, taking first place in the process and making them the 2022 Open Division SRS Crown Series Champions.

While it is Durrence’s fourth time winning the crown series championship, it was Mason’s first, despite multiple appearances.

“This is Mason’s first one,” said Durrence. “It’s his show and he’s the one who matters here.”

“At this point in his career we are just enjoying the ride,” said Durrence. “If he is up for it and healthy enough to do it, he’ll be back again next year. We will have to wait and see.” 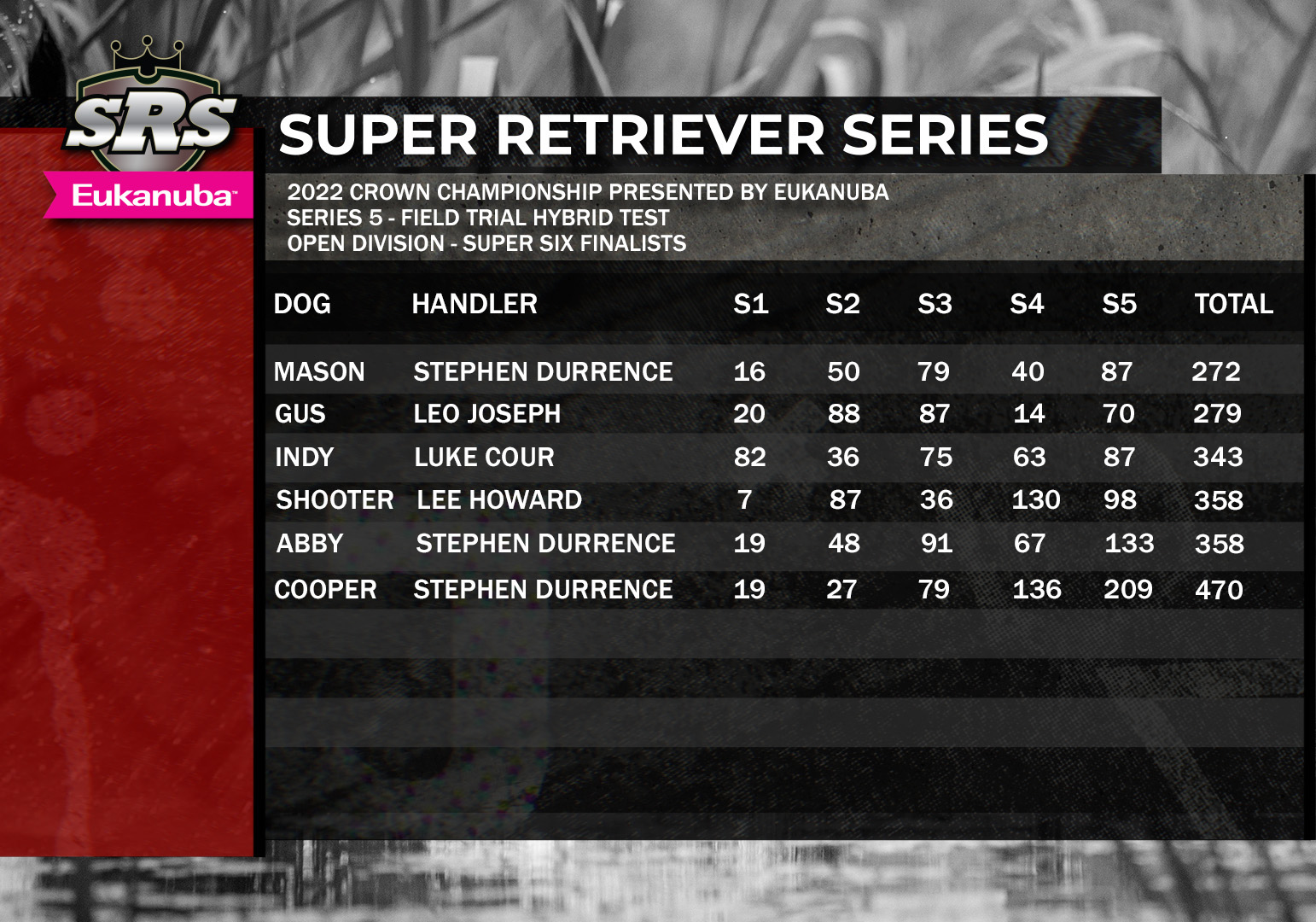 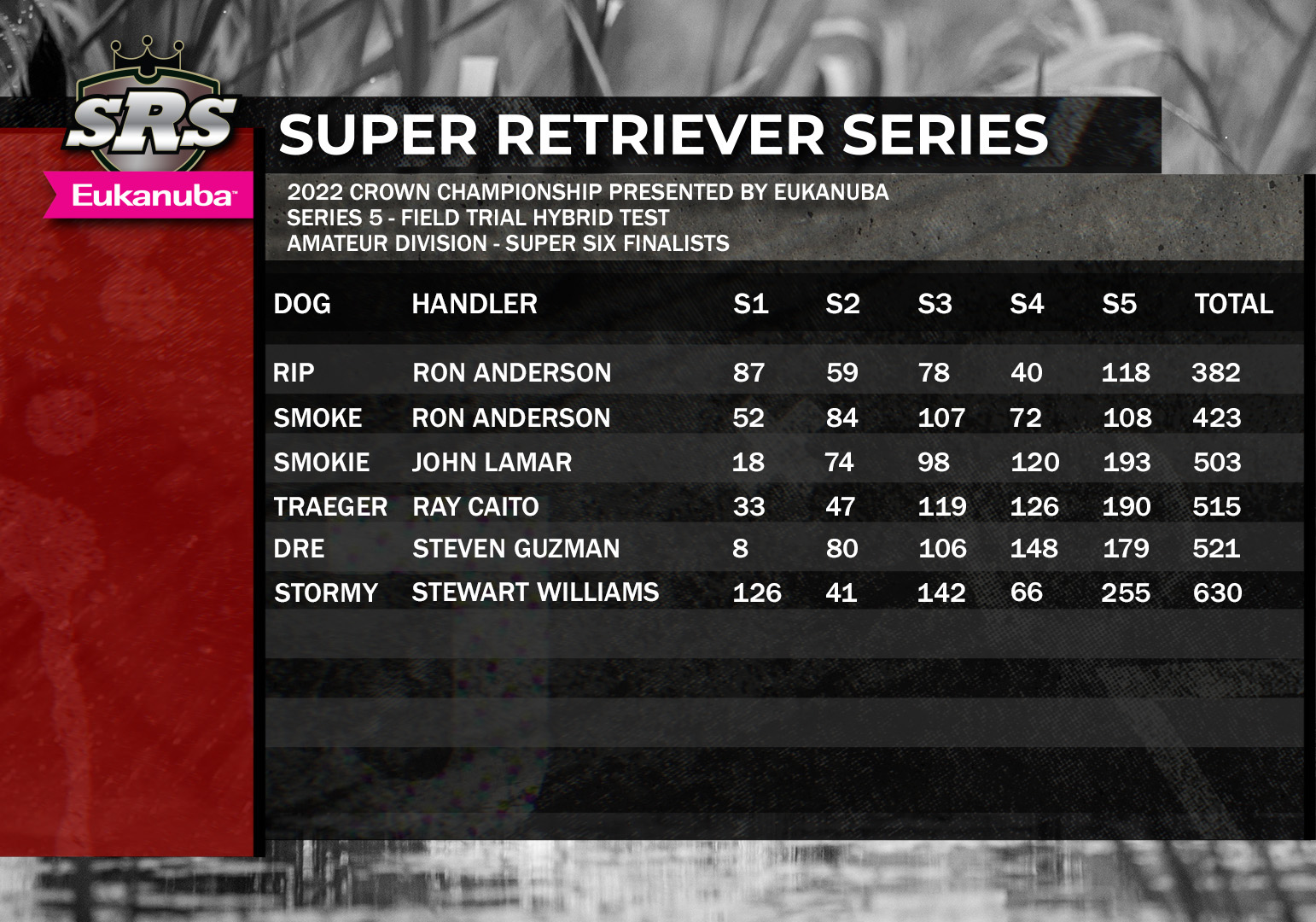